I must admit that I wasn’t particularly surprised by Donald Trump’s comments to Megyn Kelly during and after the Republican Presidential debate last debate. After all, Trump has a reputation for misogyny and for disrespecting women. Ironically, perhaps, his outburst and attack of Kelly exemplify the very political problem that Kelly was attempting to ask Trump to account for as part of his bid for the Presidency.

Interestingly, Trump attempted to deflect attention from his treatment of women by accusing Jeb Bush of having a “problem” with women. This, too, is no particular surprise. Even before Bush’s most recent statement to a Southern Baptist Convention event in Nashville that, “I’m not sure we need half a billion dollars for women’s health issues,” the group Ultraviolet shared the following five things you should know about Jeb Bush on their facebook page: 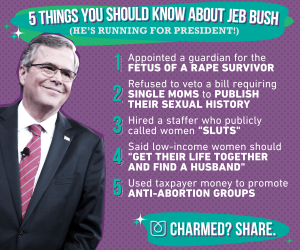 Hillary Clinton is rightly shifting the attention from Trump’s misogyny to the larger problems about what the Republican party (and the Republican candidates) have to say about women more broadly.

The comments by Trump and Bush exemplify the Republican party’s “woman problem” which isn’t so much as a woman problem as it is basic misogyny. As I said in a recent post, misogyny is the hatred of women. Something quite evident in the attitudes that attempt to engage in sexual shaming (Bush) and in reducing women to animals and/or their sexuality (Trump).

In an event on Monday, Clinton said, “While what Donald Trump said about Megyn Kelly is outrageous, what the rest of the Republicans are saying about all women is also outrageous.”

Hillary is right. Republican attitudes toward women are not only archaic, they are often offensive, paternalistic, and sometimes veiled in a vaguely Christian religiosity that needs to be challenged and debunked.

Let’s start with the Republican attack on Planned Parenthood in recent weeks, which is not only outrageous, it’s downright misogynist.

Republicans across the board have revived their attack of Planned Parenthood in the wake of a campaign by the anti-abortion group “Center for Medical Progress” which has been releasing secretly taped and heavily edited videos intended to manipulate the public’s emotions rather than talk about women’s health.

Let’s start with some facts.

Half of the pregnancies in the United States are unplanned.

Half of those unplanned pregnancies are the result of contraceptive failure.

Many of the other half happen to women who can’t afford contraception.

More than 19 million women in the US need publicly supported contraceptive services and 30% or 5.8 million of them are uninsured.

Fewer than 1% of women place their children for adoption. The decision to continue an unplanned pregnancy is a decision to raise a child.

Only women get pregnant. Getting pregnant, having babies, and raising children affect women’s health.

The facts are that Planned Parenthood is a significant provider of affordable women’s health care, particularly for poor women, in this country.  78% of their patients have incomes at or below 150% of the poverty level. One in five women in the country will use Planned Parenthood’s services at some point in her life.

Abortions make up only 3% of Planned Parenthood’s services.

One-third of Planned Parenthood’s services consist of providing contraception and they provide contraception to 80% of their patients.

More than a third of their services attend to the testing and treatment of Sexually Transmitted Diseases (STDs) which impact women differently from men and can cause sterility and neonatal death if untreated.

These are women’s health issues. Planned Parenthood didn’t invent sex or abortion. But they are responding to the reality of women’s reproductive and sexual health needs better than any other provider in the country. Trying to control women’s sexuality by defunding Planned Parenthood is just one illustration of the problem of misogyny that plagues Republicans.

The best avenue for reducing abortions is not bullying women into not having them, it’s helping provide better health care, sex education, and access to contraception so that we reduce the unplanned pregnancy rate. 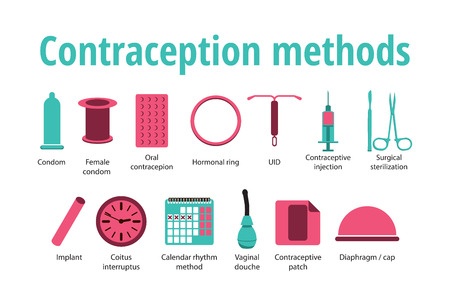 This week marks the 50th anniversary of the decriminalization of contraceptive forms of birth control. As a 40-something woman who grew up in the wake of the sexual revolution – it’s hard for me to fathom that birth control was ever illegal.

Access to birth control is something that I have always taken for granted – thanks to Planned Parenthood, free condom programs as part of university health care, and later my health insurance. However, my relative ease of access to birth control is not the norm in this country. Conservative religious groups have rallied their forces to shape public policies that prevent or impede women’s access to birth control in increasingly paternalistic and controlling ways. What is happening today is not unlike what happened in the mid-1800s when abortion and contraception were outlawed.