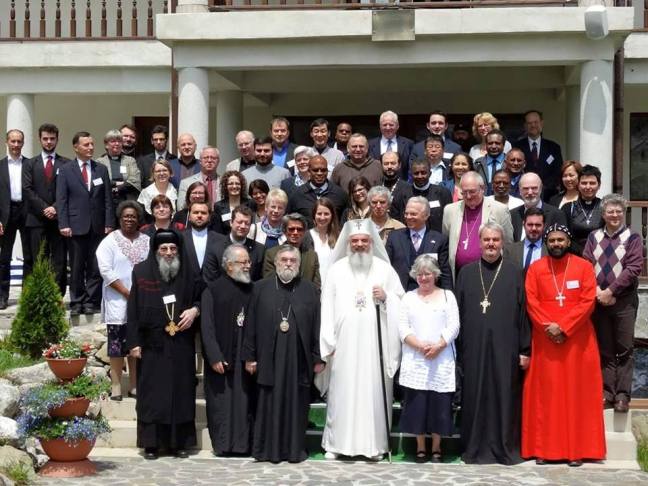 “There are practical obstacles to women during intervals of pregnancy, giving birth and nursing, of which the female employees usually take extensive leave from their employment. Being occupied in priestly work may cause complete negligence in the role of a housewife and in rearing of children.”

I am a woman, a mother, and an ordained minister.

I have also been deeply involved with the work of ecumenism for nearly twenty-five years.

There are two main areas of ecumenical work. The first is the work that different churches and traditions can do together as Christians witnessing to our shared faith – work on justice issues, social issues, and mission. This work has often been referred to as the “life and work” side of the ecumenical movement.

The second area focuses on working together to overcome the doctrinal and structural divisions that separate us from one another. There are considerable theological differences between different traditions about how we understand the meaning of communion/eucharist, for example. There are also considerable differences about how we understand the practice of ministry, specifically, who can be ordained to serve as ministers in the church.

For me, the theological differences that prevent us from being able to share the cup and the bread together are painful markers of the ongoing divisions among Christians. But when it comes to the issue of ordination and ministry – as an ordained woman, the division is not only painful, it is personal.

While the ordination of women may seem commonplace to many from the Protestant-wing of Christianity – particularly younger generations; the exclusion of women from the priesthood within the Roman Catholic and Orthodox traditions, as well as in many conservative Evangelical traditions means that my embodied female priestly reality is a tremendous threat to many outside of my normal circles of acquaintance.

While clergy collars aren’t worn as a matter of course in my tradition, I bought one a couple of months ago, almost fifteen years after my ordination precisely because the visible signs of women’s ordination challenge the established patriarchal power structures of many strands of Christianity. I wore it for the first time last week at the Faith and Order Commission meeting where official representatives of Orthodox, Roman Catholic, Anglican, and Protestant traditions met together to discuss the theological and moral issues that divide our churches.

It was at this meeting that the document containing the words above was circulated by one member of Commission. To a group of forty-five people that includes twelve ordained women who were sent to the Commission as official representatives of their churches.

Since the purpose of the Commission is to gather representatives of different Christian traditions and denominations together to discuss the issues that divide us, clearly I am aware that my status as an ordained woman is a point of theological contention in the room. However, questioning my integrity as a wife and a mother based on my ecclesial status is an egregious action that lacks either grace or hospitality. And it certainly lacked the respect due me as a child of God, a sister in Christ, and the official representative of the Presbyterian Church (USA), regardless of my ecclesial status.

While the life and work side of ecumenism feeds my soul and allows me to live into my calling as a child of God committed to seeking God’s justice in the world, the faith and order side requires a great deal of patience.

As I have written elsewhere, my experience as a mother is an ongoing spiritual practice of patience that informs my ecumenical work with faith and order. Motherhood has offered me the daily opportunity to practice patience and to focus on the long-term value of the moral, spiritual, and practical formation of children. Motherhood and practicing patience have prepared me for the ecumenical work of faith and order where cultural, social, ecclesial, and theological differences clash and collide in challenging and trying ways.

In this work, my task is to keep my eye on the long-term goal of Christian unity and to remember the importance of sitting in a room as a clergywoman, wearing my collar, as a witness to and in solidarity with my ordained clergy sisters around the world and the women who feel called to ordained ministry but are refused by their traditions.

As many ordained women already know, my roles as woman, wife, mother, and ordained minister are complementary, not incommensurable. My experience of being a woman and a mother have meant that I have come to know God and my faith in different ways than the Oriental Orthodox Metropolitan who wrote the words quoted above.

On my way to this meeting, I asked my facebook friends to hold me and the work of the Commission in prayer during our meetings. I have prayed for patience, listening, respect, and openness to guide our work together. I thank God for the many faithful people who gathered together in Romania to listen to one another and open ourselves to work of the Holy Spirit among us.

While it is true that the historic Councils of the Church did not include women (as far as we know), thanks be to God that they do now, that many of us are also ordained, and that some of us are mothers as well.

7 thoughts on “What Motherhood and Ecumenism Have in Common”