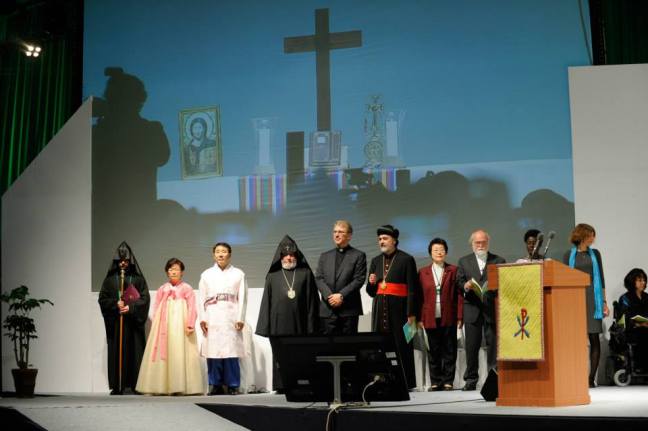 Sermons, Bible, Sunday school, and youth conferences taught me that what it means to follow God is to do justice, love kindness, and walk humbly with God. While this is by no means an exclusively Presbyterian orientation, I do credit the emphasis on justice in my upbringing to the social gospel tradition of mainline Christianity. And certainly the egalitarian polity of the Presbyterians and our vision of shared ministry between clergy and laity are the foundation of my feminism. After college I worked for the national office of the Presbyterian Church (U.S.A.) for two years—supplementing my experiential understanding of Presbyterianism with a theological and bureaucratic one.

By the time I was ready for seminary, I knew what it meant to be Presbyterian, but I wasn’t sure I understood how our flavor of Christianity differed from Methodists, Episcopalians, and Lutherans, much less Catholics, Orthodox, and so many others. I chose an ecumenical seminary so that I could learn.

My ecumenical education came not from the curriculum but from my fellow students as we discussed theology, church history, creeds, and liturgy from our varying perspectives and traditions. It also came in the form of my involvement with young women’s leadership development with the World Council of Churches and the World Student Christian Federation.

One of my friends from the ecumenical movement heads up the Council of Churches of Malaysia. Herman is a progressive, justice-oriented Christian who is deeply committed to interfaith dialogue in the midst of an increasingly conservative landscape among Malaysia’s Christian minority (less than 10 percent of the population, alongside a Muslim majority and a larger Buddhist minority). He represents and defends the rights of Christians to practice their faith, along with promoting ecumenical work fighting homelessness and addressing racial equality and women’s rights.

I asked him once about where his passion for justice came from and how he managed to practice such a prophetic ministry in his context. He credited his work in the ecumenical movement as a student—work that exposed him to people, ideas, and concerns beyond the borders of his own country and helped him to see bigger questions. It also offered him an alternative model of leadership and support from churches, friends, and colleagues around the world as he pursued a ministry of justice and compassion in his own country.

As U.S. churches struggle to find their relevance in the 21st century, interest in ecumenicity has waned among congregations and even denominations. When financial contributions are down in local churches, it becomes more and more difficult to justify supporting ecumenical ministries. This, of course, parallels Americans’ interest in having more influence over our tax dollars and our charitable donations alike.

But here’s the rub: Christianity was never meant to be about us. Like my dad taught me, we are a covenant people. The covenant was made by my local church when I was baptized, made on behalf of the whole people of God, the oikoumene. The ecumenical movement is about recognizing that the body of Christ is bigger than any one denomination. It’s about sharing our faith with one another across our lines of difference, and about learning from one another new ways to follow God.

A couple of years ago, I organized 14 churches in my local community to do a book study about issues of social justice. Each week we met in a different church in a different part of town. All of us crossed boundaries of our comfort zones; people regularly commented that they had never been to that particular part of town before. Moving around and hosting one another gave each church the opportunity to provide hospitality and care. We began to build ties of solidarity.

As we talked about problems in our community, we learned new things from one another. People discovered that we are used to discussing such issues in public meetings, with the school board, city council, or neighborhood associations. But rarely do we have the opportunity to come together as Christians from different parts of our city to talk about how our faith calls us to respond to injustice. It wasn’t partisan politics, it was talking together as Christians about how we might mobilize a response. That is ecumenism.

Denominationalism can be an important part of our identity—but we cannot let it turn into its own kind of parochialism and prevent us from seeing our obligations to the larger covenant community. My daughters know that they, too, are children of the covenant—I remind us all of it frequently. But they also know that our covenant is an ecumenical covenant, and that living a life of faith is so much more than being Presbyterian.

Christian social ethics begins with an understanding that the call of Micah to a life of justice, love, and humbleness is also the call of following Christ in the world. If you are interested in living with integrity and faithfulness, exploring Progressive Christianity, justice, and social change - I hope you will consider following this blog and talking with me about the issues raised here.
Join 549 other followers